Around this time of year, most people are gearing up for St. Paddy’s Day (or, St. “Patty’s” Day). Indeed, every year, March 17th heralds another year of drinking, shenanigans, and green-colored everything. I’m personally looking forward to curling up on my couch and chugging down a large Shamrock Shake from McDonald’s in one disgusting but impressive gulp. Certainly, my Irish ancestors would be proud, I’m sure.

While all of this might serve as a fun excuse to be belligerent, there’s actually another reason why March 17th is a very special day. You see, March 17th is the feast day of one very special saint, who is often grossly overlooked by the history books. Her name is Saint Gertrude of Nivelles, and she’s the Patron Saint of… you guessed it: CATS. 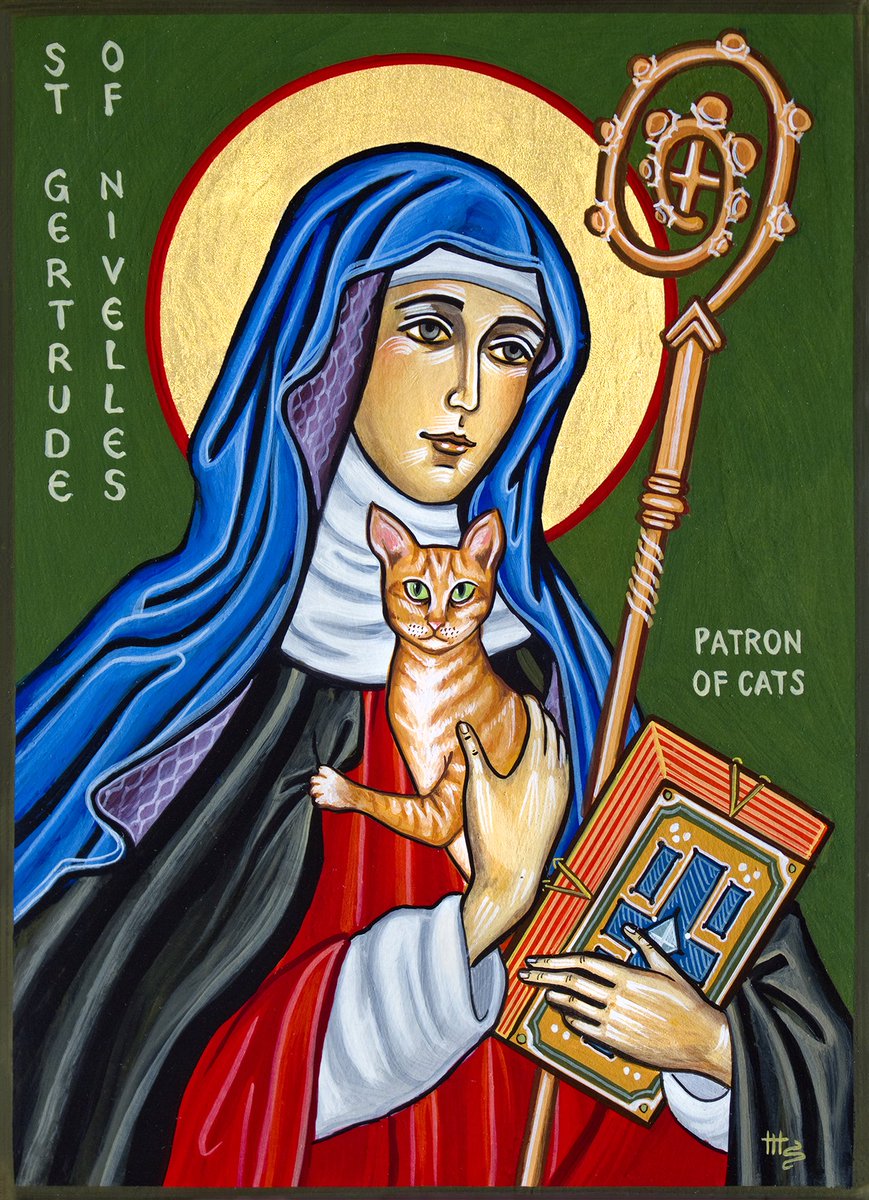 So, who was Saint Gertrude? Well, born in 628 to a noble family in what is now modern day Belgium, your girl Gerty was one sassy lassie, as God-loving as she was headstrong. At the tender age of 10, when presented with the prospect of marriage to a duke, Gertrude set the record straight and insisted that she wasn’t ever gonna marry no duke. In fact, she wasn’t gonna marry no man at all, so jot that down, thank you very much.

Some time later, after the death of Gertrude’s father, Gertrude’s mother Itta shaved her daughter’s head in the “tonsure” style that monks often wear. Gertrude and Itta then travelled to Nivelles and established the Abbey of Nivelles, which served as a Benedictine nunnery. Later, it became a monastery for both nuns and Irish monks alike. A scholarly and charitable woman, Gertrude spent many years of her life as Abbess to the monastery, dedicating her time to helping the sick, the elderly, and the poor. This earned her a reputation as a patron saint of travellers, widows, and the mentally ill. Today, she is called upon to ward off rats, fever, and insanity. Three years after she retired from her position as Abbess, she passed away at age 33. Since her feast day is on March 17th, many look to Saint Gertrude as a patron saint of gardeners as well, since this day usually brings fair weather, ideal for gardening. So like, you know, that’s cool and all, but where do the cats come in? Come for the Catholicism, stay for the cats, am I right? Well, it all started out with the whole rats and mice thing. Rodents were a huge problem in the Medieval Ages, we know this. When someone wanted to get rid of a rat infestation, they called upon Saint Gertrude. As such, much of the iconography that surrounds Saint Gertrude includes little rats and mice at her feet. Did people in the Medieval times necessarily know that rats carried with them the Black Death? Weirdly enough, probably not. At least not for like, a while. Yikes.

In the 1980s, devoted Christian Gertrude-lovers took the leap from associating Gertrude as a rodent-banisher to a protector of cats (who, you know, are also rodent-banishers.) To quote Thomas J. Craughwell, “St. Gertrude is invoked against mice and rats, which has led cat lovers to assume that Gertrude was a cat person, and so the ideal patron of their favorite pet.” Now that’s some logic I can get behind. 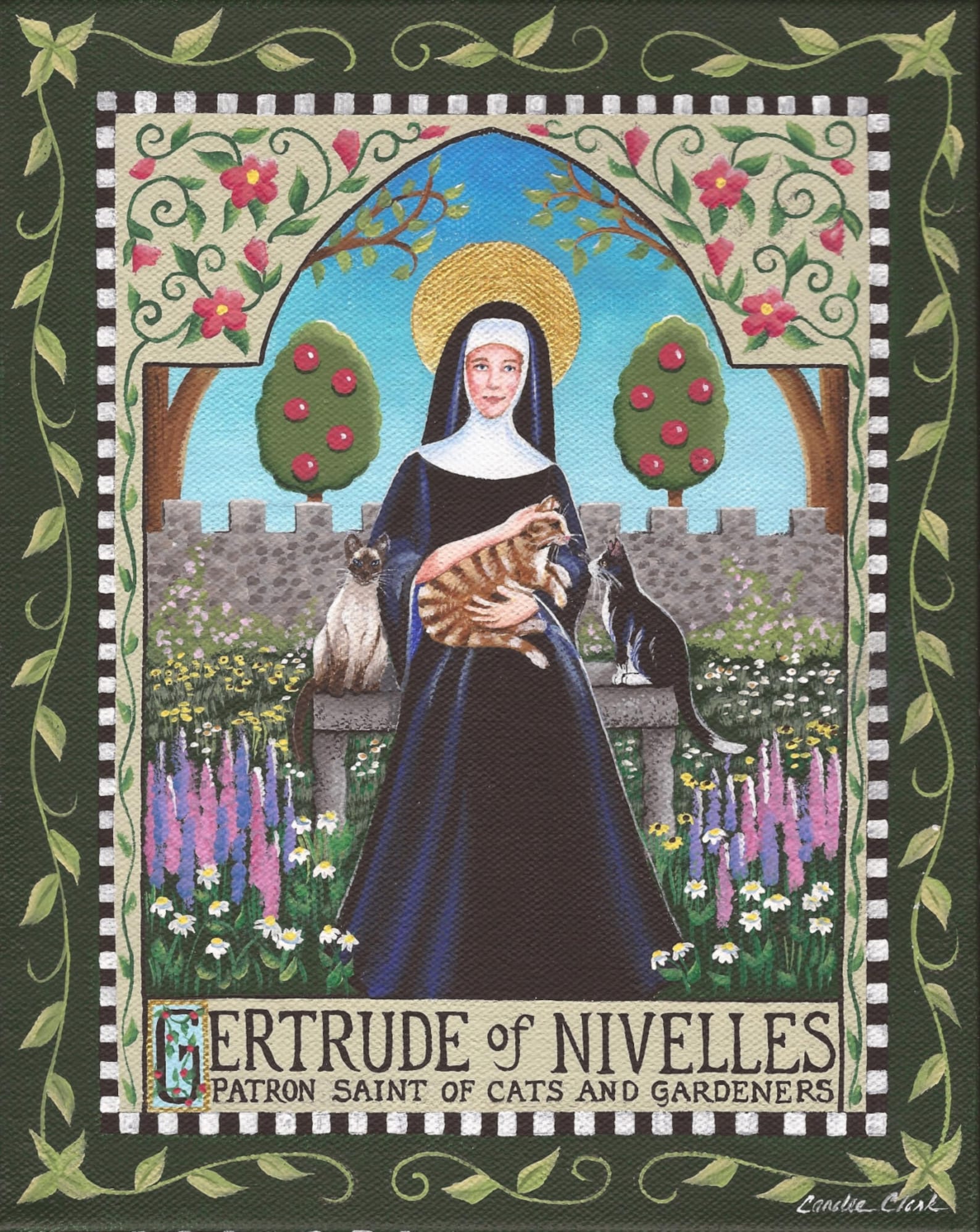 Are you just not that into drinking til you see green? Would you rather spend March 17th on your couch, snuggled up with your cats, chugging a large Shamrock Shake? Hey man, I’m right there with you. Saint Paddy’s Day? Never heard of her. We do Saint Gertrude’s Day in this house. Let us give thanks for this Patron Said Of Puddy-cats by having a day in, cracking open a fresh can of tuna and watching #Cats_the_mewvie on Netflix.

Are you of the Catholic purr-suasion? Is prayer your “thing”? Why not send one upstairs to Saint Gertrud herself with this prayer written by Ann Fitch:

"O holy St. Gertrude of Nivelles, Patron Saint of Cats, I ask you to pray that my sweet kitty(ies) will always be content, energetic, curious, playful, and good-natured.

I pray my cat(s) will be a joy to me and those I love.

Carry my cat(s) to the throne of the Father and ask Him to bless my cat(s) with long life and great happiness.

Thank you for asking blessings upon my cat(s).

Ask the Lord to pour out special graces upon all cats and cat owners.

May they bring great love to one another and live companionably in peace.

What To Do If Your Cat Ingests Drugs Or Chemicals

Is Fostering a Cat Right For You? Q & A with a Seasoned Fosterer