Remember back in April when everyone kept saying, “this whole pandemic thing will be over by June!” So young. So full of hope. Well, here we are folks, still sitting in our homes in December, faces pressed against the window, fogging up the glass, trying to remember what fresh air feels like. But hey now, this isn’t one of those doom and gloom articles, no ma’am. Besides, who wants to be outside during December anyway? Gross. So we might as well make the best of it!

Maybe you’re spending your “quality inside time” catching up on the latest Netflix documentary, maybe you’re working on your latest and greatest artistic achievement, heck, maybe you’re getting really good at staring at the ceiling for a long time without blinking. That’s valid. However, if you’re like many people, perhaps you’re working from home. And, like many people, if that is the case, maybe you’re finding out that you’re not working alone. Is your new manager a bit of a “helicopter boss”? Does he constantly interrupt your morning meetings with uncontrollable wailing? Does he like to lay all over your keyboard and send gibberish emails to all your coworkers? Well, that’s probably because he’s a cat. Your new boss is your cat. And if you’re struggling to appease Mr. Fiddles (excuse me, thats Mr. Fiddles From Corporate), then take a breather by the water cooler (which is probably just your fridge these days), and let’s look at some of the ways we can survive the work day. 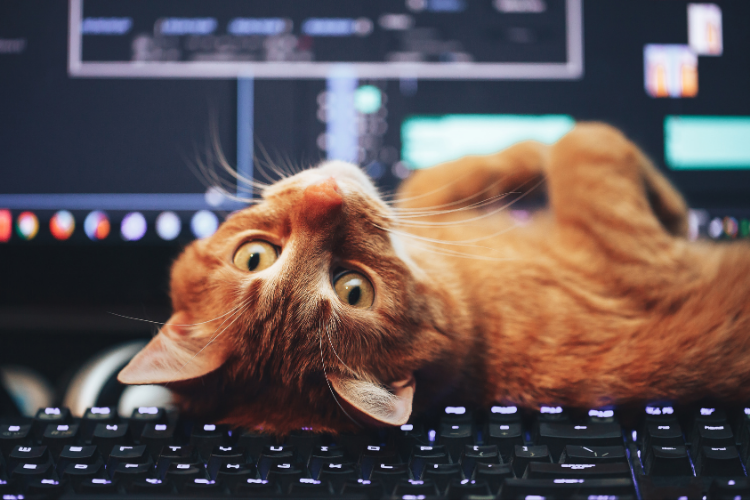 As many cat parents know, cats do not like to be left out of the fun. They’ve got serious FOMO (Fear Of Missing Out), and they’re not shy about proving it. Going to the bathroom? ALONE? Unheard of. Miss Kitty will chaperone you to and from, and also sit directly in front of you while you do your shameful business and stare at you. Intently. Hey, she’s just doing her job.

Now, while this kind of behavior can be, um, unsettling to say the least, it does become a bit of a bother when you’re actively trying to engage with, well, anyone who’s not your cat. For instance, my very own cat daughter Marzipan becomes especially offended whenever I acknowledge anything or anyone in the room OTHER than her. She’s the ultimate clinger. If I’m sitting on the computer chair, that’s her cue to scream relentlessly until I pick her up for snuggle time.

If your cat is a Marzipan, the best way to assuage her is to give her the time she needs to “check things out”. Before hopping on Zoom, sit at your desk for a while and just relax. Have your breakfast, coffee, what have you, and let your cat get used to the idea that you’re gonna be plopped there for a while. Let her wander around your lap, sniff the computer, anything she wants. When she’s given everything a thorough inspection, she’ll likely lose interest after a while and find something else to do. The only way to deal with Marzipans is complete submission. Trust me, I know.

Cats become most interested in something that is outside the norm of what they expect. Kitties are creatures of routine, and maintaining that routine is paramount to their health and satisfaction. Now that our “normal” routine has been disrupted, the best way to appease your kitty is to create a new one. This doesn’t necessarily mean that you have to manage your new schedule to the letter lest all chaos break loose, but once your cat notices that there is a pattern to your new behavior, she will be a lot less likely to feel the need to be involved.

While we’re on the subject of routines, another important point to mention here is that there will be a lot of new sounds going on, whether it be Zoom meetings, phone calls, or work-related audio of any kind. A good way to discourage your kitty from getting too nosy while you’re on the phone is to make sure to wear headphones, and avoid putting anyone or anything on speaker, if you can.

Another great way to keep your kitty from crashing your Zoom chat is to preemptively double-check all of her needs and wants ahead of time. Is the cat box clean, and is it easily accessible to her? Does she have a bowl full of food and water? Making sure all of your cat’s basic necessities are taken care of will do wonders to prevent her from yowling in the background of all your calls and distracting you from all those sweet, sweet graphs and spreadsheets. Ah, nothing like a good spreadsheet.

Don’t forget that love and affection are also basic necessities for our kitty companions! Schedule some time before your work day to give your cat all the worship he knowingly deserves before posting up on the computer for the next 8 hours. If he’s an especially feisty guy, indulge him in some play time, or set up an automated cat toy for him to pounce on while you’re working.

Last but certainly not least, keep in mind that your cat baby really, really likes to take naps. It’s one of his favorite hobbies! And when you’re home, the best place to take a nap is somewhere close to you, his favorite person! So, to keep your kitty comfy while still reaching all your quotas and due-dates, try moving his favorite blanket or cat bed close by so that he has somewhere familiar to curl up in while you’re working. And if that place happens to be your lap, why not let him? Let sleeping cats lie, as they say!

March is PAWS to Read Month - 5 Cat Books Your Kid Can Read to Celebrate!